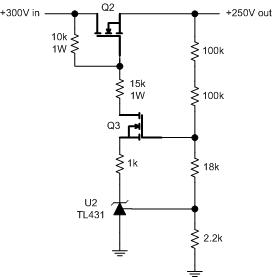 In testing the breadboard amp, I found that the distortion is strongly effected by the value of the bias current on the output tubes.  An adjustment for each tube was added so that the correct bias value could be dialed in even if the tubes are not well matched.  Clearly, the bias supply has to be regulated so that changes in line voltage will not change the bias and cause added distortion.  The plate supply can vary over a large range with no effect on bias which is obvious from the characteristic curves of the tubes.  The screen supply, however, has a big effect on bias so I decided to regulate it as well.  This is something that was never done in the classic amps, possibly because regulators are complicated and expensive when built with tubes.

Again, I decided to use a solid state circuit for the regulator, since a constant voltage is a constant voltage whether it is produced by tubes or transistors.  Q2, the series pass transistor is an IRF730 power MOSFET.  U2 is another TL431 and Q3 acts as a common gate amplifier to keep the high voltage away from U2.  I originally had Q3’s gate voltage developed from a voltage divider connected to the input of the regulator.  After looking at the circuit for a while, though, I realized that the extra divider could be eliminated if Q3’s bias was developed from the output divider.  This has an added benefit.  The input voltage has noise that would have to be eliminated by the loop, but the output is already clean.  The resulting regulator has a dual feedback path, though; one through Q3’s gate and one through the control pin on U2.  Lacking the modeling tools to analyze a complex feedback circuit, I measured the open loop gain and phase and found that the circuit has a comfortable 45° phase margin at 13 KHz where the gain reaches one.  The regulator drops the 300 Volt plate supply to 250 Volts for the output tube screens and the plates of the phase inverter.  With regulation of both bias and screen voltages, the amp’s performance is constant with variations of AC line voltage of ±10%.

Back to Tube Amp