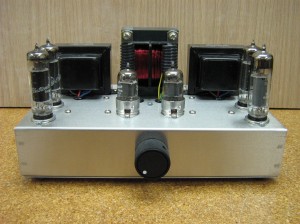 I got started on the road to building this project a few years ago when I was building an amplitude modulator for an old and rare Millen ham radio transmitter that I had found at a swap meet.  The transmitter was from the 40’s and of course was designed with vacuum tubes, so the natural way to proceed was to use tubes in the modulator.  A plate modulator is essentially a high power audio amplifier whose output is connected to the RF circuit of the transmitter rather than speakers or some other load.

Since I had not designed a tube circuit in many years, I did some research on the web to see how others had solved this problem.  In doing this, I came across tons of web pages devoted to tube audio circuits, tube amp product reviews, modification ideas, etc. for home stereo systems as well as for guitar and instrument amps.  In perusing this material, some of it seemed to me to be a bit hard to believe.  Many said that they could hear clear differences between different manufacturers of tubes in every stage of the amplifier including the rectifier tubes in the power supply.  Others built their own amplifiers but refused to measure distortion or any other performance parameter, counting on their sense of hearing to distinguish between good and bad designs.  Many comments on blogs disagreed wildly on what sounded good and what did not.  I built a breadboard of one of the amps that was claimed by the designer to sound good and found that the distortion was 8 to 10 percent, even at low to medium power levels.  Clearly, this listener found the distorted sound pleasing.

Many intelligent and technically astute people, though, are convinced of the value of tube amplifiers and can hear the difference in a stereo system.  There are lots of references on the web.  Google “tube amplifier” for more information than you can read in a month.  The best technical article that I have read appeared a number of years ago in the IEEE Spectrum magazine and is available here:  http://www.spectrum.ieee.org/archive/1640

There seems to be little doubt that there is an important difference between tube and solid state amplifiers when used in instrument amplification service in rock and roll bands.  Here the amps are often used in “overdrive” conditions and the resulting distortion products could well sound far different in tube and solid state circuits.  If you want to reproduce the sounds that the original artists made in their day, you need to use similar amplifiers.

Cursed with a “tin ear”, there is little chance that I could ever tell the difference between good and bad amplifiers, so I do NOT want to get involved in any arguments about what sounds good or bad.  I believe, though, that the amp I am about to describe is reasonably well designed.  Measurements reveal that it has low distortion (about 0.2%@1W)  and wide audio frequency response (6.5Hz to 124KHz @-3dB).

The amplifiers I built are classic stereo “basic amplifiers” rated at 15 watts per channel.  They require about 0.5Vrms of drive for full output.  They can be driven with a cd player, tuner or any other program source with a “line level” output.  To use them with a guitar pickup, microphone or turntable, you will need a suitable preamp.  The amps use output tubes that are nearly identical to the classic EL84 or 6BQ5 that were used in many tube stereo amps as well as guitar amps and organs.

Although the amps were designed for use in a stereo system, there is no reason you could not use one or both channels to drive speakers in a band set up.  Any mixer, effects processor or even other guitar amp probably has a line level output that you could use to drive this amp and the amp can drive external 4 or 8 ohm speakers.