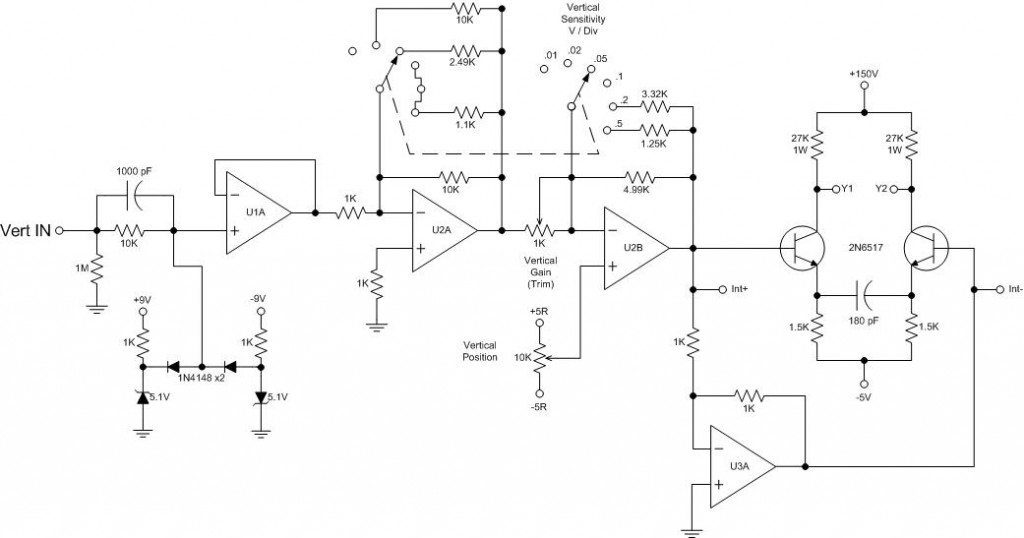 The vertical amplifier uses wide bandwidth op-amps for most of the gain and a differential amplifier with a pair of 2N6517’s to drive the deflection plates.  The 2N6517’s have a VCEO rating of 350 Volts and an FT of 40 to 200 MHz, adequate for this job.  U2 and U3 are Linear Tech LT1361’s with a Gain Bandwidth product of 50 MHz and U1 is a FET input LT1122 for very high input impedance.  The 1meg resistor across the input sets the input Z to match common scope probes.  The 10K series resistor, along with the two zeners and two diodes protect the input circuit from contact with high voltages.  The original circuit used just 2 back-to-back zeners, but the capacitance of the zeners along with the series 10K resistor really limited the high end frequency response.  The gold doped 1N4148 diodes switch fast and have really low capacitance.  U1 has a gain of one and very high input impedance.

The gain of U2B is controlled by one deck of a two pole six position rotary switch.  The gain is about one with the vertical gain pot set to max and the rotary switch fully clockwise (as shown on the drawing).  The next two positions of the switch select gains of 2 and 5.  In actual operation, the gain of U2 will be slightly more than stated, because the vertical gain trimmer pot on the board will be used to calibrate the gain to match the grid lines on the face of the scope tube.  As the rotary switch moves more counterclockwise, U2B’s gain stays at 5 and U2A’s gain steps from 1 to 2 to 5 to 10.  This will result in vertical sensitivity steps from .01V/div to .5V/div.  Using a 1X / 10X switchable scope probe will stretch the lower sensitivity to 5V/div, more than adequate for working on most solid state circuits.

Update:  The first breadboard used garden variety op-amps and worked OK with the circuit above.  Early work on the PC board version has shown stability problems when all the leads shown are bundled and brought to the front panel.  The circuit will be changed to use a different approach to setting the gain.

U2B drives one of the bases of the 2N6517’s in the output stage and U3A inverts U2B’s output with a gain of one to provide differential drive to the other base.  The bases of the two transistors are near ground potential, meaning the emitters are at about -0.6Volts.  The voltage across the 1.5K emitter resistors is then -0.6 – (-5) = 4.4Volts.  So the emitter current is 4.4V/1.5k = 2.9 mA.  The collector current is nearly the same, so the collector voltage is 150 – 27k (.0029) = 71.7 Volts, close to the desired value of 75Volts.  The output amplifier’s gain is set to a value of 18 by the ratio of the collector to emitter resistors.  The two Y axis deflection plates are driven by the collectors of the output amplifier.